A Perfect Day in San Francisco

Well, our latest adventure is underway! The Wilsons were stupid enough to agree to another trip with the insanity that is our family of five, and we so grateful for their stupidity!

The Wilsons like to get to the airport 12 hours early, so we had some time to kill in Nashville. We decided to park at the Parking Spot for the first time. That is a pretty good option as it turns out. It is valet, so you just drop your car, load your stuff in their shuttle (or have them do it), and you are unloading at the departures area less than five minutes later. We all got TSA Pre-Check, I assume thanks to Suni's and my Global Entry, which was convenient. There was literally no one in line in front of us, and we sailed right through.

Our flight was pretty uneventful other than we were almost two hours late getting out of Nashville due to mechanical problems with the plane at the gate ahead of ours, a seating SNAFU that upset everyone in our party of nine, and the dramatic thunderstorm that hit just as we were taxi-ing to the runway. I had to shut my window, because the natural electric display outside my window looked like a Hollywood creation. Given the weather, the climb-out was actually pretty smooth. We were on our way to the Left Coast! The kids were fantastic the whole flight. Mary Beth and I had a couple of challenges. OK, mostly me.

We were on an Airbus 321 that was obvious one that Alaska bought from Virgin America when the latter met its demise. This plane still had IFE screens at each seat and purple mood lighting. I had read that Alaska had completed its overhaul of all the former VA fleet, but that is obviously not the case. Once we left the Tennessee storms behind us, it was smooth sailing

Four hours later, we landed in SF, collected our bags, and found separate Uber rides into the city. We arrives at the steps of the gleaming Fairmont in 25 minutes or so. Our home away from home for the next few days is absolutely beautiful. The history of this place is fascinating. The rooms are huge, especially by San Francisco standards. We were all pretty tired considering it was almost daybreak back in Tennessee. The Wilsons headed to 676, the Stinsons to 602. Before we knew it, we were out.
I woke up a couple of minutes past 6 am on Sunday. To my surprise, the shower was running. I knew that meant Suni was ready to explore the city on foot. Everywhere we travel, we like to get to know a city by foot or pedal. In NYC, biking is our preferred method, but they are not joking when they say SF is hilly. We never even thought about finding a bike. We headed north on Mason Street toward Fisherman’s Wharf. The Bay looked so close, but it seemed we descended Nob Hill forever. When we hit Greenwich Street, we decided to head up Telegraph Hill and down its back side so we could check out the Ferry Building. The view from Coit Tower, atop Telegraph Hill, was stunning. The variety of the flora here is equally so. We could hardly identify any of the seemingly endless flowering and fruiting plants. We never made it to the Ferry Building. The kids woke up and let us know they were hungry.

We decided to take the ferry to Sausalito. Waylon and I hit the outside deck down low; everyone else headed upstairs. We watched Alcatraz slip away on the starboard size and talked about Bay Area serial killers. [Shoulder shrug]. 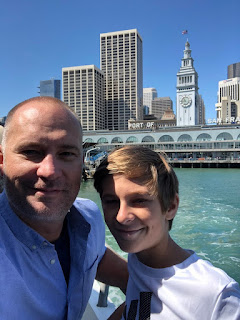 We docked at Sausalito in a short 30 minutes and quickly scoped out our brunch choices. Scoma’s got high marks according to the Google machine. It stretched out into San Francisco Bay toward the distant foggy city, looking like a perfect movie set for a romantic comedy. They were just opening, and professional-looking wait staff scurried around preparing for service, smoothing white tablecloths as well-dressed people waited patiently. It was no place for kids… but we didn’t give a damn. A bit later, we were sipping some good local wines and eating the best calamari of our lives. The local organic tomatoes and burrata was amazing. Calvin chose mussels prepared Thai style; Waylon got the hangar steak; Ava got huge prawns cocktail-style. It was all fantastic! Gavin and Coen got the kids’ shrimp and fries. They probably chose poorly, as those only came with three shrimp.

We took an Uber back across the Golden Gate Bridge. An altercation between our driver and another led to my kids learning a couple of new words – which says something, considering they live with Suni and me.

When we got back to the Fairmont, Suni and I tried to lay down for a nap, but the Wilsons weren’t having that. Instead, we went for a log walk with the kids. They were a little lot wound up, so we made a beeline for Joe DiMaggio Park, hopeful they could use up some of their pent-up energy. The park was a pretty big hit. We then walked down to Pier 39 in an unsuccessful attempt to see the sea lions that are rumored to hang out there. All we saw were a tourist mob, a Chinese container ship headed out to sea, and some overpriced ice cream. “It’s all part of the experience, honey.” Our walk ended with the very uphill slog to the Fairmont. All the kids were champs!

We decided to ditch the kids in one of the hotel rooms with pizza and have an adult-only dinner at the Tonga Room, the famed tiki bar in the Fairmont. The concierge said there were no reservations available, but we took our chances as walk-ins and were able to get a table. It was an experience we are happy we have had, but generally agree that it was kitschy and over-priced with drinks that are more expensive than good and food that is unlikely to win a James Beard award any time soon. In other words, exactly what we should have expected from a tiki bar/restaurant in a San Francisco hotel. Bright spots were our apparently bipolar, Francophile waitress, the indoor rain showers, and Mike’s first Anchor Steam.

We finished the evening with a magnificent port and dessert at Laurel Court, the main restaurant in the hotel. A truly wonderful first day in San Francisco! 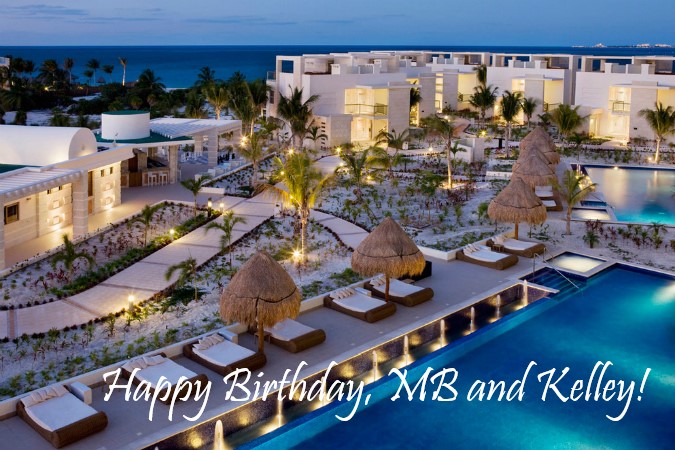